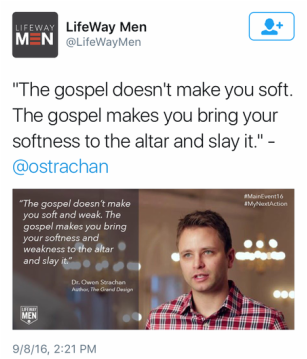 A few days ago I ran across a strange statement on the interwebs that me go, “huh?” Shocking, I know. The statement, pictured left, is reportedly a quote from Owen Strachan, associate professor of Christian theology at Midwestern Baptist Theological Seminary and former President of the Council on Biblical Manhood, made during his speech at a recent conference.

Now, I wouldn’t normally devote an entire blog post to a single statement that was originally given within the context of a larger speech and a larger conference. However, this quote has been presented favorably outside its original context, and this is not the first troublesome quote of its kind that I’ve seen from Strachan. Additionally, the quote itself is representative of a more pervasive practice within certain circles of evangelical Christianity in which cultural gender stereotypes are “baptized,” imported into scripture, and then presented as “God’s design.” In light of all of this, I do think this quote needs to be addressed.

So here’s my question: What in the world does “soft” and “softness” mean in this context? When I asked, via Twitter, what was meant by the words, LifeWay Men (who shared the original Tweet) eventually responded that “soft” meant “pushover, whiny, spineless, passive.” Perhaps it did, and I will admit that the term does carry those shades of meaning in the vernacular, though I’m not so sure that’s the most common understanding of the word. According to Merriam-Webster, to be “soft” is to be “marked by gentleness, kindness, or tenderness.” As we will see, according to that particular definition, the gospel most certainly DOES make us soft.

In his letter to the Galatians, the Apostle Paul provides a list of traits that will be visible in a person who has been transformed by the gospel and follows the guidance of the Holy Spirit. This list is referred to as “the fruit of the Spirit.” Here’s what he has to say:

But the fruit of the Spirit is love, joy, peace, patience, kindness, goodness, faithfulness, gentleness, self-control; against such things there is no law.
​-Galatians 5:22-23, emphasis added.

In another letter, Paul instructs a different group of first century Christians to

Be kind to one another, tenderhearted, forgiving one another, as God in Christ forgave you.
–Ephesians 4:32, emphasis added.

The Apostle Peter, writing to a group of Jesus-followers had similar instructions:

​Finally, all of you, have unity of mind, sympathy, brotherly love, a tender heart, and a humble mind.
–1 Peter 3:8, emphasis added

In his letter to the Jesus-followers in Thessalonica, Paul reminds them that he and his ministerial companions

… were gentle among you, like a nursing mother taking care of her own children.
– 1 Thessalonians 2:7, emphasis added.

This passage is especially interesting because Paul favorably compares his own conduct and that of his companions, all of whom were men, with the conduct of a nursing mother.

Later, in a letter addressed to a young man named Timothy instructing him about the qualities necessary for spiritual leadership, the author states that a leader must

Not [be] a drunkard, not violent but gentle, not quarrelsome, not a lover of money.
– 1 Timothy 3:3, emphasis added.

Last, but certainly not least, Jesus himself had some things to say about gentleness. In Matthew 11:29 he used that word to describe himself.

Take my yoke upon you, and learn from me, for I am gentle and lowly in heart, and you will find rest for your souls.
– Matthew 11:29, Emphasis added

The same Greek word, πραύς, that is translated “gentle” in the verse above is found in the beatitudes of Jesus’s sermon on the mount, in which Jesus praises that very quality in others:

Blessed are the meek [πραύς, gentle] for they shall inherit the earth.
– Matthew 5:5

Interestingly, the Liddell and Scott Greek-English Lexicon defines πραύς as “mild, soft, gentle, meek.” So, even in Greek, there is a lexical connection between gentleness and softness, and this is in fact a quality that Jesus and the other New Testament writers commend.

​Now, to be clear, these qualities of Christlike gentleness, kindness, meekness, and tenderness, and softness are not at all signs of weakness; they actually require great strength of character to manifest, even if our cultural notions of masculinity say otherwise. I submit to you then that it is not our softness that the gospel does away with, but our culturally conditioned gender stereotypes instead.